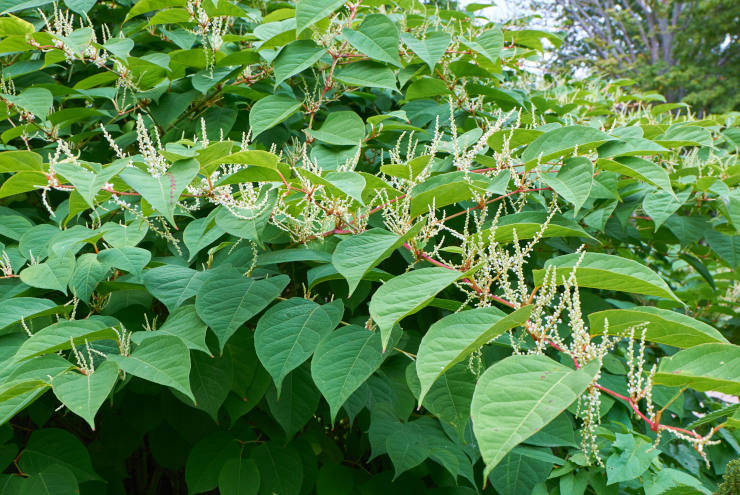 Japanese Knotweed – every homeowner’s worst nightmare. Not only is it virtually indestructible, but most mortgage lenders will refuse to finance a property that has knotweed within seven metres of its walls – meaning that you can never escape.

If you’re looking at a property and your HomeBuyer Survey has identified Japanese Knotweed growing in the back garden, how concerned should you be? Let’s take a look.

What exactly is Japanese Knotweed?

If you haven’t come across it before, it’s important to know that Japanese Knotweed is an invasive species of plant that manages to thrive just about everywhere in the UK. Its aggressive growth (up to 10cm a day) affects the growth of other plants, ultimately causing problems with biodiversity, flood management and property damage.

In fact, the species is so pervasive that it is considered an offence to “plant or otherwise cause [Japanese Knotweed] to grow in the wild” under section 14(2) of the Wildlife and Countryside Act 1981. When trying to get rid of the plant, contaminated soil and plant rhizomes (roots) are classed as “controlled waste”, under part 2 of the Environmental Protection Act 1990.

It can be hard to identify Japanese Knotweed, and several unrelated plants are often mistaken for it. Key characteristics are light green, shield-shaped leaves, tall, hollow stems that resemble bamboo and can grow up to 3 metres tall, and clusters of tiny white flowers that bloom in upright formations.

Which homes are affected?

Thanks to its ability to grow almost anywhere, Japanese Knotweed can be found just about anywhere in the UK. However, the peak of its popularity was during the Victorian period, so properties built around this time are the most likely to suffer from a historic problem with the plant. This plant tracker is a useful tool for identifying how prolific Japanese Knotweed is in your area.

Is it really that bad?

The speed and resilience with which this plant grows has been known to cause damage to structures, particularly where weak points are already present. Tarmac, paving, building foundations and retaining walls can all succumb to knotweed in very little time if the plants are left unchecked. However, detailed surveys have concluded that Japanese Knotweed isn’t any more destructive than other plants that are left to grow rampantly.

The biggest problem with Japanese Knotweed is that it’s undesirable. It requires constant maintenance to prevent it taking over an entire garden, and is extremely difficult (and therefore expensive) to eradicate entirely. According to the UK government, the cost of controlling existing Japanese Knotweed had risen to £1.25 billion in 2014.

Ultimately, although you may want to steer clear of properties that have been diagnosed with Japanese Knotweed in the garden, it does not have to be a deal-breaker if you have already fallen for the house. Your best bet is to speak to an experienced surveyor and arrange for a Building Survey or specialist report to help you understand the potential implications if you proceed with the purchase.